ATHENA is one of the European Space Agency’s largest missions. SENER Poland has won a tender for the design and production of mechanisms to support and release the huge mirror of the telescope. The project is funded by a program to develop innovative technologies of key importance for future European space missions.

The goal of the ATHENA (Advanced Telescope for High Energy Astrophysics) mission will be to find answers to the big scientific questions of how galaxy groups and black holes form. The probe is in practice a huge 12-meter X-ray telescope, ktory enables the study of phenomena such as gamma flares, magnetic interactions between extrasolar planets and their stars, gases surrounding groups of galaxies, Jupiter’s auroras and comets in our solar system. ATHENA is the second L-class (Large – large) under the scientific program of the „Cosmic Vision” European Space Agency.

Mission budget will exceed 900 millionoin euros, and the probe is scheduled for launch in 2028. SENER Poland signed a contract with ESA to design, manufacture and test a prototype HDRA (Hold Down and Release Actuator) for the mirror of the ATHENA telescope.

To explain the operation of HDRA it is necessary to present the operation of another mechanism, for which theory roSENER Poland’s Instrument Selection Mechanism (ISM) engineers are also responsible – Instrument Selection Mechanism). The ATHENA telescope carries two scientific instruments: a spectrometer and an X-ray vision transducer. ISM is used to reposition the mirror of the telescope so that the beam of rays goes to one of these instrumentsow. Thus, it makes it possible to use one large mirror for twooch instrumentow. The purpose of the HDRA’s support and release mechanism is to ensure that the telescope’s huge mirror remains stationary until the probe is in the correct orbit. WoAt that time the mechanism will be released and it will be possible to move the telescope’s mirror.

– The biggest challenge in this project is the high payloads resulting from the huge size of theoin mirrors – its diameter will be more than two meters, and its weight will be more than a ton. Release mechanisms must be reliable. The mirror will be held by six devices. If they do not withstand the loads and give way during launch, there will be damage to the mirror. In turn, if ktorybody does not work properly and does not release the mirror, it will remain stationary and the probe will not be able to complete its mission – mowi Marcin Wygachiewicz, project manager at SENER Poland. 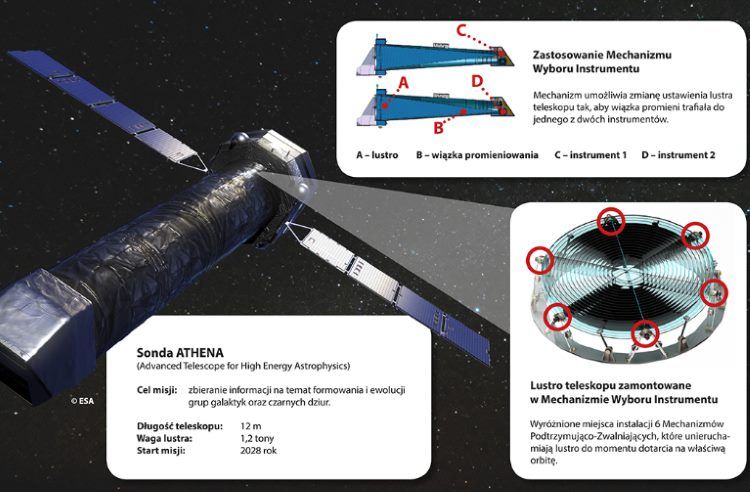 ESA’s tender for HDRA release mechanisms was aimed only at companies from Poland and is funded by the Science Core Technology Programme (CTP), whichory serves to develop new technologies for future scientific missions. Scientific missions are among the most demanding and contribute the most to scientific and technological progress. This is because making new discoveries requires devices thatore work better than those created in the past.

– CTP program plays an important role for the European space industry. This is because ESA conducts preparations for missions years in advance and commissions companies from our continent to develop new technologies. In this wayob strengthens the innovation and competitiveness of the European space industry – moWi Dr. Ilona Tobjasz, director of development at SENER Polska.

The design of the mechanismoin sustaining-valves is also an example of the positive impact of ESA membership for the Polish economy. All stages of the project will be carried out by SENER Poland in cooperationohe cooperation with other companies from our country. In addition, the contract will allow SENER Poland to develop technology for a new range of productsoin whichore will be able to be used in future space missions and sold commercially.

Over the holidays, wind farms in Poland provided 40 percent of the. energy